Manganese is one of the most abundant metals on the earth’s surface and various forms of it can be found in air, in soil, and in water. It doesn’t occur naturally in a pure state; oxides, carbonates and silicates are the most important manganese-containing minerals. When Manganese forms compounds in the environment with oxygen, sulfur (S), and chlorine, the resultant compounds are water soluble; examples of Mn compounds are manganese dioxide (MnO2), manganese tetraoxide(Mn3O4), Mn salts (chloride, sulfate, carbonate, and ni-trate), Mn silicate, and potassium permanganate (KMnO4).

Manganese in surface water sources can originate from natural sources or as a result of human activity such as mining and industrial discharges. Some uses include the production of dry-cell batteries, in chemical manufacturing, in the manufacture of glass, in the leather and textile industries, and as a fertilizer. Manganese compounds are used as fuel-oil additives, smoke inhibitors and anti-knock additives in petrol.

Manganese is considered an essential nutrient and contributes to many bodily functions, including the metabolism of amino acids, cholesterol, glucose, and carbohydrates. It also plays a role in bone formation, blood clotting, and reducing inflammation. The element is a normal part of the human diet in low quantities and in Ireland, the European Drinking Water Regulations 2014 have set a limit of 50 µg/l (micrograms per litre).

Is Manganese harmful in Drinking Water?

Water passing through soil and rock can dissolve minerals containing manganese and this is the most likely source of manganese in drinking water. Water containing high levels of iron and manganese appears as brown water from the tap. It can be unpleasant both in taste and appearance often causing staining of baths, basins and clothes. Drinking water with elevated manganese levels can, in the long term, cause a manganese build-up in your system.

The level of dissolved Manganese in surface water i.e. with a reservoir can increase dramatically or ‘spike’ under certain conditions. The discussion before will explore those conditions and the issue caused by the manganese increase.

Why Does Manganese in Surface Water Sources Spike?

Stratification of surface water into the epilimnion (upper layer) and hypolimnion (lower layer) results in different water characteristics such as DO & pH. In the epilimnion, radiation from the sun allows for photosynthesis resulting increased DO and pH. Under these conditions manganese is oxidised to insoluble forms which can be easily removed from the water by coagulation, clarification, and filtration. 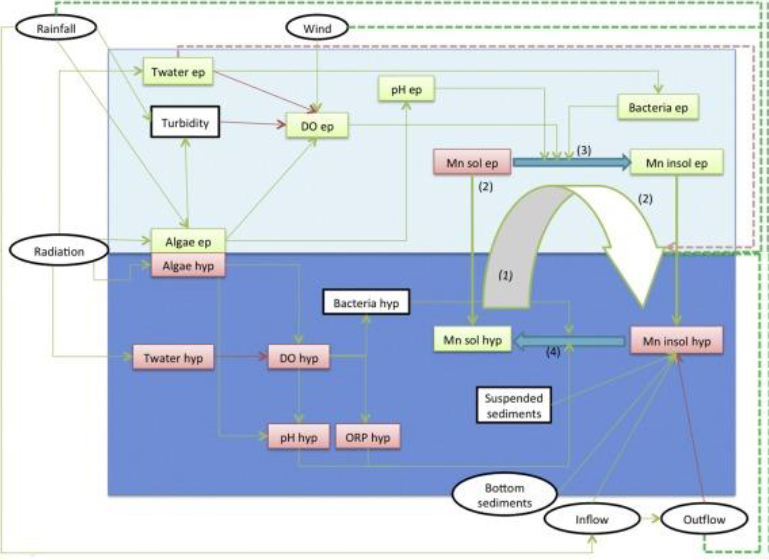 In the hypolimnion layer, DO is depleted and bacteria obtain oxygen through Manganese ion reduction, thus releasing dissolved Mn+2 into the water. Molecules cannot diffuse back to the epilimnion due to different densities and properties (DO levels and pH) causing a cascading deterioration of water quality.

At Coftec, we understand the complexities and difficulties faced when dealing with manganese and other recalcitrant substances in raw and wastewater sources.  We have experience in addressing a variety of contaminants in drinking water, including manganese. Our multi-disciplinary team of scientists and engineers offer a proven track record of leveraging their expertise and experience in finding innovative and practical solutions to the problems such as excess levels of manganese faced at water treatment plants.

Contact Coftec whether designing a new facility or refurbishing, expanding or bringing an existing facility up to regulatory standards to discuss how we can help in your project.