What are Causes of a Manganese Spike in Drinking Water?

Oxidation States of Manganese in Water

Manganese (Mn) from surface water sources is a persistent problem at water treatment plants as soluble forms of inorganic and organically bound Mn are difficult to remove by conventional treatment techniques.  Specifically, a significant proportion of soluble Mn will remain in the water through to the disinfection stage where is it oxidised by chlorine. This oxidisation process precipitates the soluble Mn(II), resulting in the deposition of Mn(IV) in the distribution networks, staining of treatment analysers and customer appliances, and elevated colour at customer taps causing complaints and damaging provider reputations.

The most effective methodology for preventing an elevated Mn event in the distribution network is to reduce the concentration of soluble Mn forming in the surface water source and remove one of the main causes of a Manganese spike in drinking water.

Conditions Required for a Manganese Spike in Drinking Water

As discussed previously, thermal layers can form in a water source i.e., a lake, with the epilimnion at the top and hypolimnion on the bottom. Some characteristics of the epilimnion will be a lower level of soluble Mn, higher temperatures, higher pH, mixing and higher dissolved oxygen concentration, as a consequence of algae photosynthesis. These conditions allow for insoluble particulate Mn (IV) to form, which precipitates and falls to the bottom hypolimnion layer in the lake.

Light doesn’t penetrate to the bottom hypolimnion layer; hence algae cannot develop to produce oxygen by photosynthesis. Therefore, the hypolimnion will have low to no dissolved oxygen, lower temperatures, and lower pH because acidic CO2 forms are not assimilated. When the oxygen levels are depleted, bacteria obtain the oxygen necessary for respiration through nitrification and then Mn reduction. This reduction process increases the concentration of dissolved Mn(II) in the water column.

Prevention of the formation of thermal stratification at the lake source will reduce the risk of soluble Mn(II) being formed and thus one of the main causes of a Manganese spike in drinking water.. Lake reservoir mixers are a proven technology to prevent thermal stratification and the resultant soluble Mn formation, by maintaining uniform quality throughout the water column. Climate change and the intensification of agricultural and forestry practices have the potential to generate the conditions for a Mn spike and to make this phenomenon a more common problem for water treatment plant to deal with going forward.

A data review of a Mn event at a water treatment plant in Ireland, highlight the sudden nature of a lake turnover and its effects on treated water quality. Effective surface water reservoir mixing would have prevented this event from occurring.

The sequence of events are as follows: 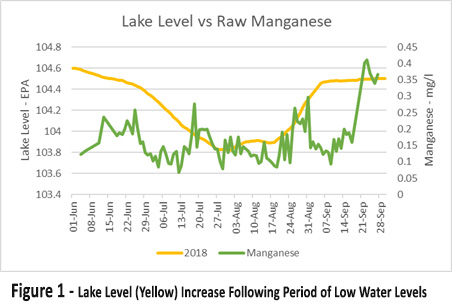 Figure 1 shows the lake level (yellow) increase following a period of low water levels. The level increase was caused by a rainfall event following a drought period which recharged the lake. The raw water Mn (green) suddenly spiked around the of 14th September. 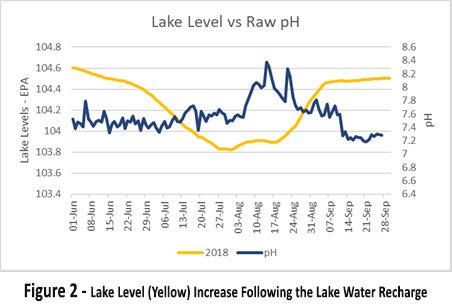 Picture 2 shows the lake level (yellow) increase following the lake water recharge. On the week on the 14th September, the pH (dark blue) suddenly drops from pH 7.7 to pH 7.2. This indicates that the lake incurred a turnover event. 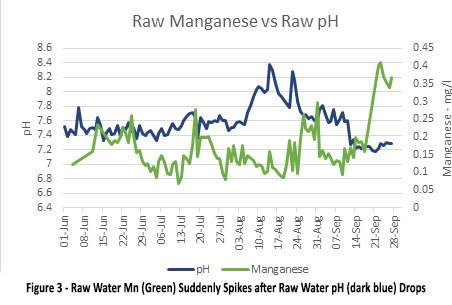 Picture 3 shows the raw water Mn (green) suddenly spikes after the raw water pH (dark blue) drops. This indicates that after the turnover event, manganese in raw water spiked high (0.42 mg/l) and was abstracted from the lake to the water treatment plant. 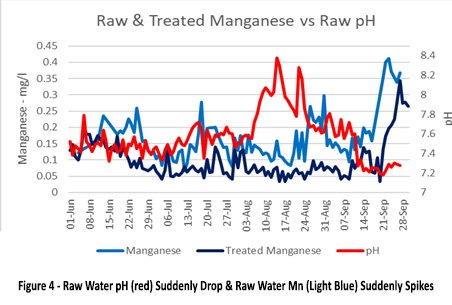 Picture 4 shows the raw water pH (red) suddenly drop and the raw water Mn (light blue) suddenly spike. This was the turnover event in the lake. This raw water Mn is followed by a mirroring spike in treated water Mn. The water treatment plant had coagulation, flocculation, clarification, filtration (including a layer of manganese dioxide filter media). This indicates that the manganese from the raw source was soluble and not removed by conventional treatment. 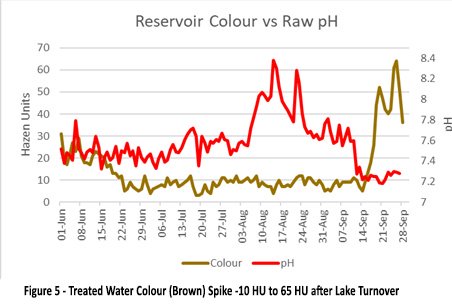 Picture 5 shows the treated water colour (brown) spike from 10 Hazen units to 65 Hazen units after the lake turnover. This is caused by soluble Mn being oxidised in the disinfection stage by chlorination. This elevated colour spike is similar to what is visible at customer taps after a lake turnover event.

Are you facing a situation of recurring Manganese spikes in the drinking water supply? Let us help – Coffey/Coftec can provide solutions to prevent such events at water treatment plants by using its expertise knowledge in data capture, analytics and practical working solutions.